I present to you the cinnamon roll blondies, aka cinni roll blondie. It’s not really a secret that I am super into cinnamon rolls (I wrote a recipe book all about them here), so this felt like a no-brainer. These beautifully fudgy blondies are made with Kerrygold browned butter, chopped white chocolate chunks and crunchy pecans. Then they’re topped with a classic cinnamon roll cream cheese icing and cinnamon sugar swirl.

How to make the best cinnamon roll blondies:

Here are my top tips for the best results to really set you up for success! I like to make sure I stick to these and use the correct tin for blondies that you just can’t resist! 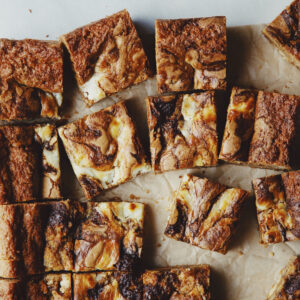 For the cream cheese topping

For the brown sugar swirl

For the cream cheese topping

For the brown sugar swirl

Subscribe to my bi-monthly newsletter for exclusive recipes, as well as early access + discounts to newly launched workshops and e-courses. You can unsubscribe at any time.

Want to know the best part about this lemon loaf?

Have you ever eaten doughnuts without licking your

Can we talk about JUST how good no-churn ice cream

Want to know the secret to epic brownies / blondie

It’s Friday AND it’s a bank holiday – which

Have you achieved the goals you set out for 2022?