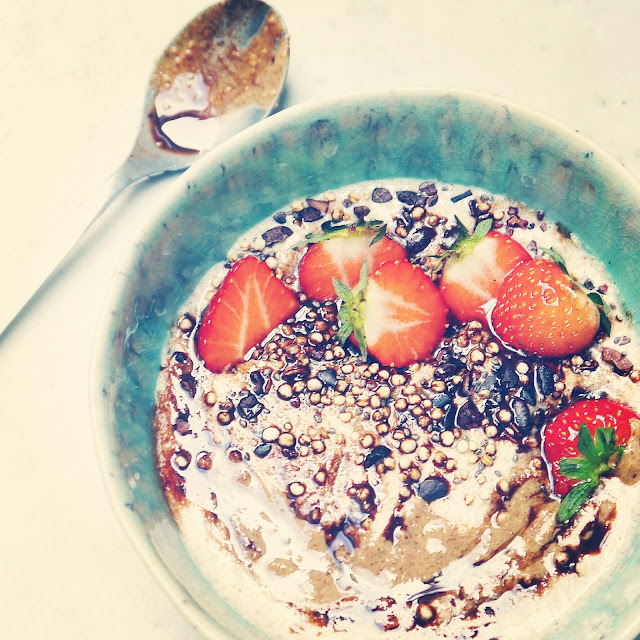 i bought a coconut in Covent Garden, ready for cracking into this morning to re-hydrate and re-fuel so I was ready for the day ahead. The corkscrew came out, as did the screwdriver (which I have previously given myself a black eye with), but try as I might, I could not get into that coconut. I even joked that we might need the power saw. So this morning’s foodie encounter had to be, much to my dismay, different. Saying that, I made something that almost everyone can enjoy without the guilt!

Both gluten free and vegan, this buckwheat bowl was spiced with cinnamon and ginger, laced with cacao coconut oil and drizzled with peanut butter and agave syrup. Add a sprinkle of quinoa pops, cacao nibs and chia seeds, plus a scatter of strawberries and you have by far one of the most indulgent but yet considerably healthy breakfasts on the planet. It takes a bit of planning and a few special ingredients but it definitely makes breakfast more exciting. Waking up to a little bit of deliciousness every morning certainly starts your day in a positive way and that, is the only way to start.

Buckwheat is not wheat related but rather a plant based superfood that is rich in complex carbohydrates. It can be used in granola or sprinkled upon yoghurt to give some crunch, even ground to a flour for use in cakes and desserts. However, I soaked mine overnight in water, drained and rinsed it in the morning and whizzed it up with some almond milk, spices and maple syrup as an alternative to my usual porridge oats.
If only I had my coconut water to go with it.

1. Drain and rinse the buckwheat then place in a food processor with the spices, milk and three tablespoons of the maple syrup. Blend until smooth.

2. Mix the melted coconut oil with the cacao powder and the remaining syrup and salt.

3. Heat the porridge in a saucepan over the hob then pour into bowls. With a spoon, swirl the peanut butter and chocolate through it, then drizzle a little agave syrup on top.

4. Sprinkle generously with strawberries, quinoa pops, chia seeds and cacao nibs or toppings of your choice.

Shooting for clients is TOTALLY different to shoot

Just because someone has more followers than you,

Does procrastination get the better of you? 🙈

AD 💛 Are you busy all the time? Just because

AD ❤️ Who’s fed up of the dark days already?

Want to know my no.1 composition and styling techn

Anyone else just about coming out of hibernation m

“Bravery is the audacity to be unhindered by fai

AD ☁️ What’s better than a cookie? A FUNFETT

My Food Photography Gear Guide is here 📸 It co

If I could have one thing for Christmas… It wo

Are you like me? When it comes to baking over the